Cannabis, being the magical plant we all know and love, has a long history of providing us with those a-ha moments.  You know, those moments where everything seems to fall into place.  Those moments where if we were to be thinking outside the box for whatever reason, we find ourselves in a groove of doing exactly that.  At the same time, however, we can very much fall out of that groove and find ourselves in a state of too much creativity, where we're so creative that we can no longer translate that into words or anything remotely coherent.

Can cannabis actually make you creative?  Or is this all just inherent creativity?  Let's dive right into this!

Does Cannabis Have an Impact on the Way We Think? 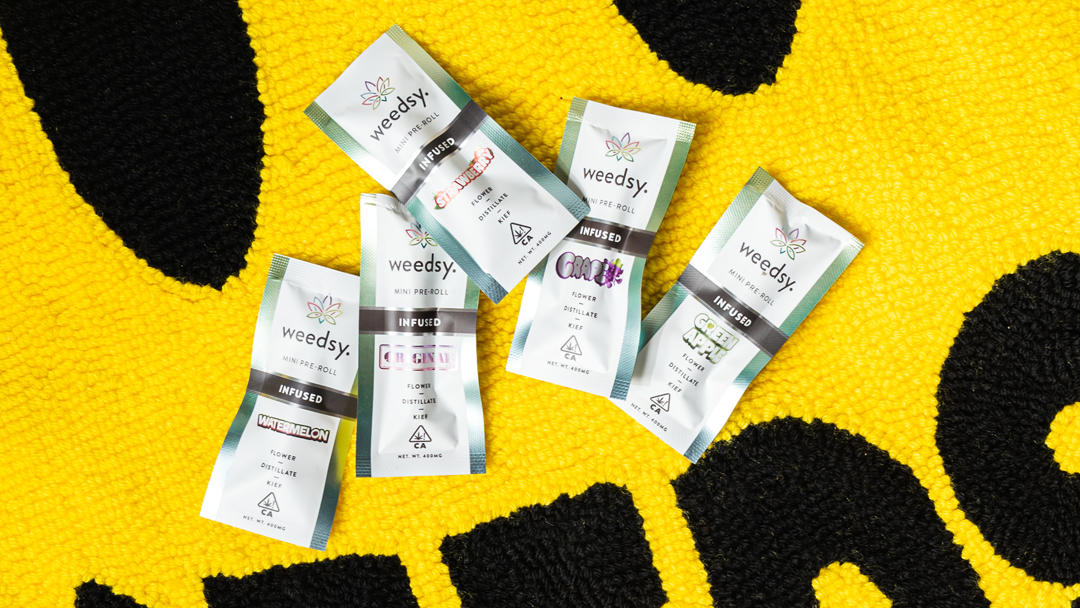 First thing's first, what makes a creative person creative?  Typically, the human brain is an intricate organ.  With about 100 billion neurons and 100 trillion connections, your brain is central command to everything you think, feel and do.  Within the brain, you have a right and left side (duh).  While the two sides look very much alike, there is a huge difference in how each side processes information.  According to Roger Sperry's Left Brain/Right Brain theory back in the 1960s, the left side of the brain is more verbal, analytical, and orderly than the right side.  Left side brain is better at thing such as:

Conversely, the right side of the brain is more visual and intuitive.  It's sometimes referred to as the analog brain, where there's way more inherent creativity than the very black and white nature the left side of the brain possesses.  Typical right brain-dominant thinking awards people with skills such as:
So where does cannabis fit into all this?  When cannabis is consumed, it affects the frontal lobe area of the brain.  People who we'd consider inherently creative would usually be artists, musicians, writers, engineers, and sometimes entrepreneurs, all for which they use skills very much associated with right brain-dominated thinking.  In other words, they think outside the box.
According to a study, weed can stimulate the frontal lobe region of the brain that modulates creativity.  For those that are already inherently creative, however, the link is present but inconclusive.  Similar to how non-linear the right brain can be at processing information, simply consuming cannabis isn't as black and white as you might think.  Read: if you are already creative, cannabis may have an effect on making you more creative, but it's not guaranteed that it would.
Remember, it's important to note that everyone processes cannabis differently.  So someone who is already more of a creative thinker might respond to cannabis differently versus someone that is more left brain-dominant.  Personality plays a huge role in this, too.  A more anxious person might benefit from a balanced hybrid that chills you out.  And during this chill out period of the high, the creative juices may start flowing.  Conversely, if you already have no trouble in getting into the creative zone, smoking might just fizzle out your creative energy and leave you a lifeless potato on the couch.

To What Extent Does Cannabis Boost Creativity?

By definition, a creative person should have a higher level of abstract comprehension than a non-creative person would.  These people see solutions to problems in a non-linear way that awards them the ability to create whatever medium they want to such as art, poetry, music, etc.  Cannabis could expand one's perception to look at the world in an even more abstract way.  The dosing of it, however, can very much hinder the process all the same.

According to a 2014 study, low doses of cannabis slightly improves fluency, or the number of responses your brain provides in processing information, and flexibility, or the variation in answers.  Unsurprisingly, cannabis affects originality, or the uniqueness of the responses as well.

In that same study, increased dosages of cannabis completely lowers all three elements of response in the brain.

It's also worth noting that cannabis use can modulate the amount of creativity you feel, but may not provide much value in elaborating what sort of feelings you are experiencing.  This plays a huge factor in say, visual artists for example, where the painting might look so abstract, even the artists themselves cannot put into words what the image is, but instead, might explain the feelings that were experienced when the piece was made. 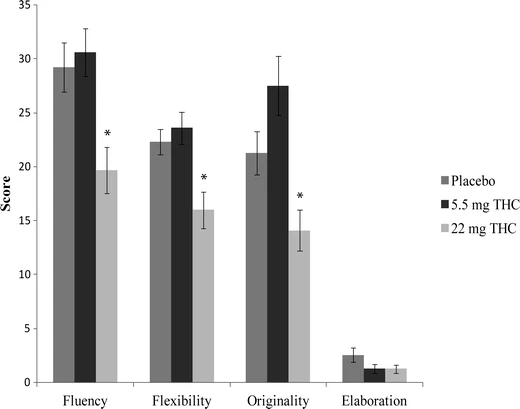 Is Cannabis Reserved For Creative People?

Absolutely not!  Cannabis is very much, as we mentioned above, the magical plant that allows us to experience a good amount of things, regardless if we are creative or not.  While there is data and literally thousands of anecdotal reports swaying said data towards the notion that people who are open to new experiences and like to try different things do tend to use cannabis already.  There is still not a conclusive link that cannabis and creativity go hand-in-hand.  What it really boils down to is that people who think more abstractly describes a large swath of cannabis users.  Therefore people associate cannabis with higher levels of creativity.

What Are Our Favorite Strains for Creativity?

For those creatives out there that actively use cannabis for enhancing the process, or even for those not-so-creative people out there looking to unlock a degree of abstract thinking to get inspired, cannabis products vary in strain and the effect to be experienced throughout.  Here are some of our favorite products to enjoy to do all of that!

Sour Diesel is a sativa-dominant parent strain.  And thanks to quite a few brilliant right-brain dominated cultivators out there, most of the Sour Diesel strains absolutely help you get in the zone.  The uplifting feelings you experience might leave you a little more scatter-brained than usual, but that would soon subside once the high truly sets in. 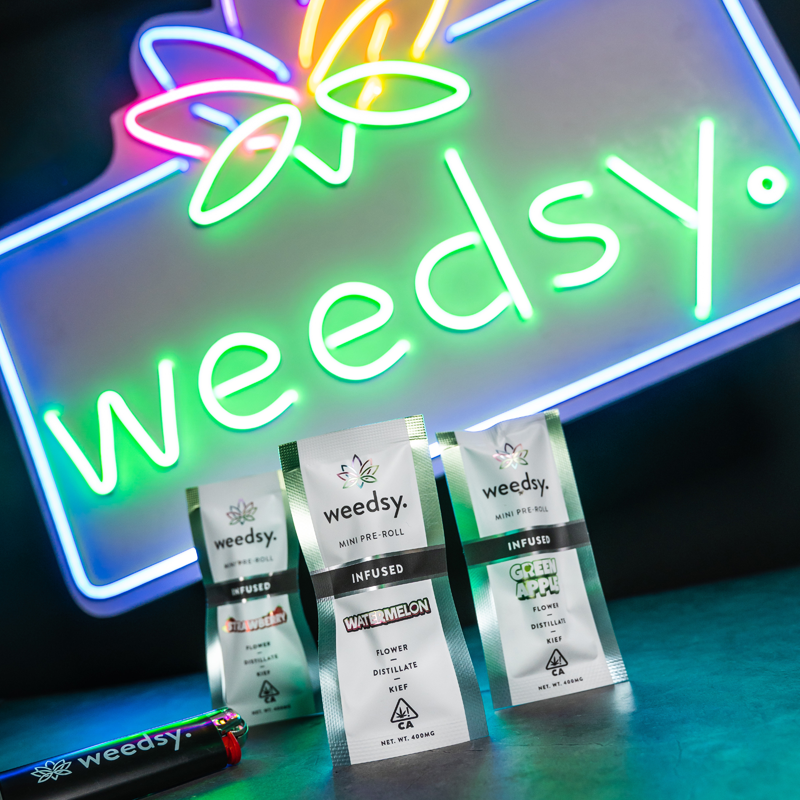 Rainbow Sherbet is an evenly balanced hybrid made by crossing Blackberry and Champagne.  Now, you're probably thinking that the indica in the hybrid might not pop you off as much as a sativa-dominant or even a sativa-leaning hybrid.  Think of the indica as a balancing point, keeping you a little less scatter-brained and more in control of the high to then channel the experience towards creativity rather than just relaxation.

Again, how you handle yourself during the high makes all the difference!

Shameless Plug:  ALL OF THE WEEDSY INFUSED MINI PRE-ROLLS

You best believe that all our half gram Weedsy Infused Mini Pre-Rolls make the list for our favorite strains.  While the strains themselves are comprised of locally-sourced exotic flower ranging from hardcore indicas to balanced hybrids to even sativa-dominant strains, all five flavors do have the ability to get you into the creative black hole that awaits!

Being open to new ideas and experiences is the first step to boosting your creative juices.  Consider stepping into a dispensary and asking your budtender for a Weedsy today!