We all have a way that we like to toke up.  It can be incorporated into everyday life or for special occasions.  This plant medicine has helped to balance out, alleviate body pains, boost mood, and stimulate both creativity and focus.  Whether you've been smoking since the prohibition days or looking to pick up a Weedsy Infused mini pre-roll for the first time, it can be a ritual to smoke after a long day of work, pack a bowl and blaze the evening away when something happens, or sit in a blunt rotation with friends catching up on everyone's lives.

Regardless of why you are choosing to smoke, it's a powerful plant that's becoming a part of everyday use for stoners everywhere.  In fact, the U.S. National Survey on Drug Use and Health found in 2013 that 8.1 million Americans were using cannabis, which was double the amount reported in 2002.  Remember, in 2013, California still classified cannabis as illegal, so you can probably imagine where that number is now post-legalization.  A Marist poll estimates that nearly 55 million Americans are now stoners.

The more times we do something, the more it becomes a habit.  And the more habitual it becomes, the less we have to put any thought into it.  Our bodies can just run the programs for us.  We can find ourselves falling into a habit of mindlessly smoking without any thought behind it, sure.  As the cycle continues, we eventually find ourselves unable to discern whether we are sober or stoned.  Thankfully, there's a way to avoid this cycle and keep cannabis more as a tool to enhance ourselves, instead of being a slave to it.

Instead of associating weed as a tool for escapism, it can be used as a means of looking introspectively.  If the beautiful plant-derived substance came from the Earth, cannabis can very well have the power to help ground people too.  Using a ritual to become more mindful of your cannabis consumption can enhance your experiences while also growing your relationship with yourself and others.  Having a cannabis ritual can be what makes or breaks the experience.  And having an effective ritual consists of intention, environment, and choice of strain which will be further explored in this piece.  So let's pick our favorite Weedsy Infused flavor, spark it up, and look inward! 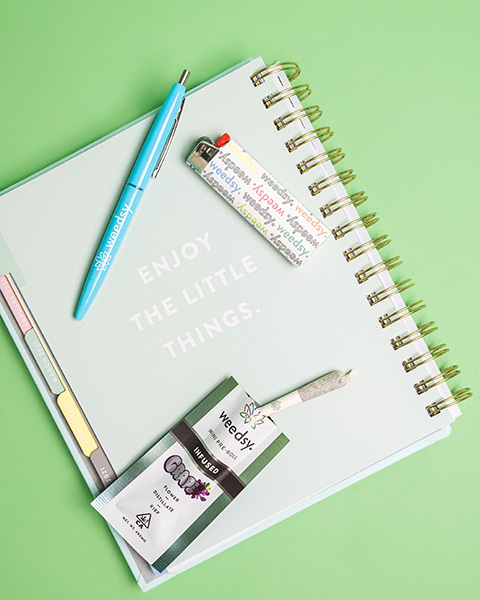 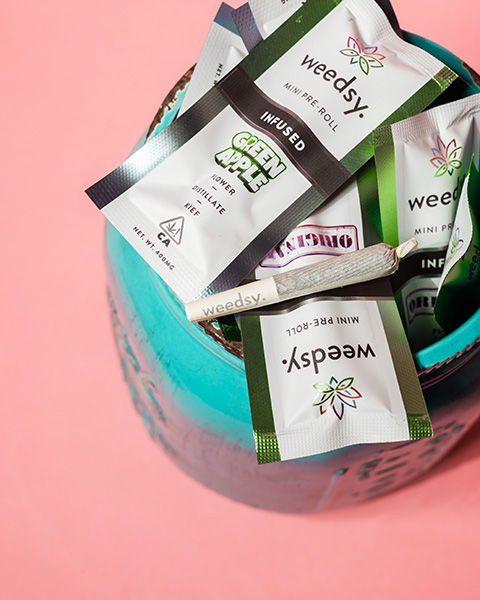 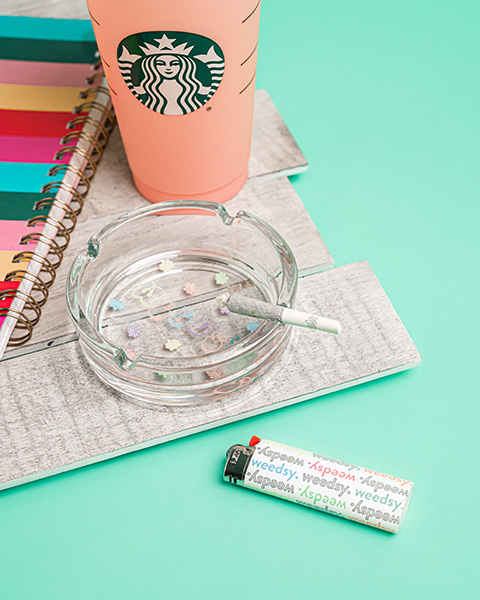 WHY CREATE A WEED RITUAL?

With the fast-moving world we live in, it's important to set aside time to ground and stabilize ourselves.  Taking this time can allow us to feel more connected to ourselves and those around us, increase focus, and provide a sense of security.  A ritual will be determined primarily by the set and setting.  'Set,' is the internal mindset, whereas 'setting' refers to the literal physical environment you choose to be in.  Mindfulness practices have been said to alter our realities to more desirable ones.  As Dr. Joe Dispenza states in his book, Breaking the Habit of Being Yourself: How to Lose Your Mind and Create a New One, "life is about the management of energy, where your place your attention, is where you place your energy."  By creating a weed ritual that is focused on both set and setting, we have the power to transform our experiences while under the influence.

The first and most fundamental element of creating a cannabis ritual is to get a clear understanding of why you are wanting to create one.  This is called intention, and by setting an intention, or series of intentions, you are inviting the ability to foster a more enjoyable experience, "particularly if your intention is solidly aligned with your values" says Jason Frishman, Psy. D.  Smoking can help stimulate the mind for more creativity.  It can also help curb an upset stomach.  It can even be used to help relax and enjoy being present a little more.

Intention setting has limitless potential.  Regardless of the why, cannabis will be there to help transcend these experiences.  Some ideas to help get you kickstarted on your ritualistic journey can be surrendering both your body and mind to the experience, allowing the very many benefits cannabis consistently delivers to enhance your mood and thoughts, or by having something to look forward to.  It could even be as simple as completing the rest of your responsibilities if your intention involves maintaining focus. 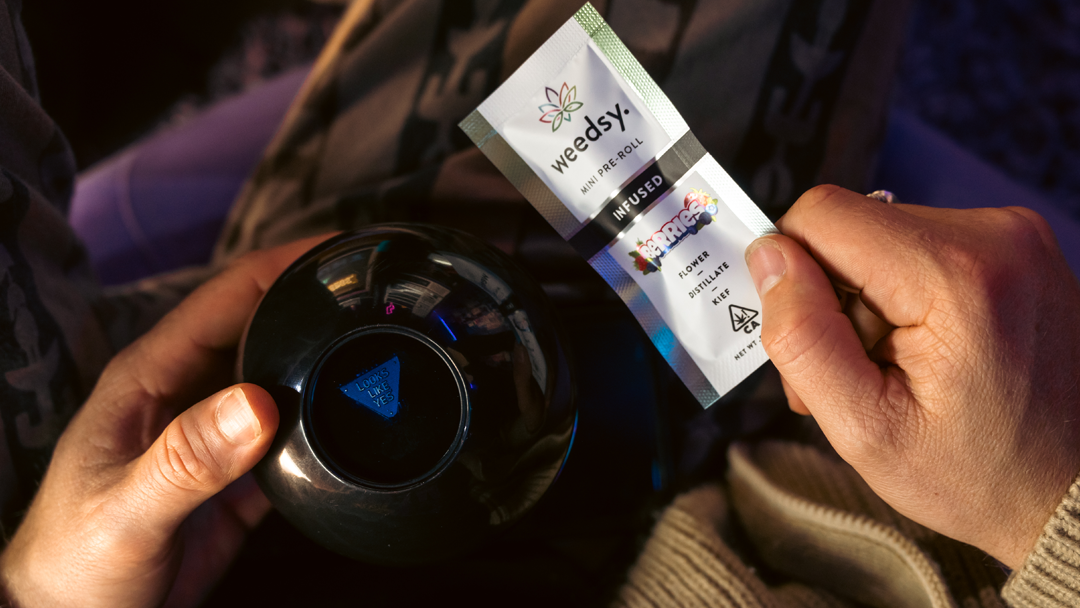 For the sake of setting your intention and seeing that your experience does its job in accomplishing the nitty, gritty details of that intention, product selection is key.  This starts with the brand you trust and where you went to go and purchase the bud.  This is where purchasing legal products from licensed dispensaries play a major role.  Purchasing products from the illicit markets may save you a couple bucks here and there but you're sacrificing both quality and safety at that point.

Licensed cannabis products must adhere to strict regulatory standards that ensure all cannabis products are free of pesticides and other harmful components involved in both the cultivation and manufacturing of the finished product.  Doing your research beforehand will give you a better idea of which brands to look out for.

Once you've found a reputable brand you trust, it's time to pick a strain that resonates with you.  Consider the desirable high, the THC potency, the cannabinoid and terpene profiles, and most importantly, the entire experience before, during, and after you smoke.  And if you'd rather skip the exploration process, you can always hit up your local delivery service or walk into your favorite dispensary and ask your budtender for a Weedsy Infused mini pre-roll.  The perfect size for a solo sesh, packed with exotic flower, infused with delicious distillate, and smothered in kief, you'd be hard-pressed to find something powerful enough to slap you silly off something so small!  With six flavors to choose from, don't underestimate these little guys.  Testing shows we're averaging upwards of 40-50% THC and going through one of these half-gram beauties should leave you in the perfect state to achieve all the intentions you set out to do in the beginning of your ritual!

HACK THE ENVIRONMENT THAT BEST SUITS YOU

Once the intention is set, your environment is the next key factor.  Pick a space that is going to enhance your experience the most.  Have you ever had to sneak a toke in your room hoping that nobody in the house will be able to detect the smell?  Or got too high in a place where you weren't supposed to be high in the first place?  Now you need to be overly self-aware as to not blow your cover.  Am I speaking from experience?  Maybe.  We can all probably think of a time where we weren't in an ideal environment to enjoy our high.  This is precisely why you should consider your setting in establishing your weed ritual.

Everyone's ideal environment will be different.  It can vary from being in a warm and cozy room with nice-smelling candles and warm lights, to laying out in nature with a scenic view feeling the soft breeze pass your body.  These environments can even include other people like trusted friends or family to make the entire experience more enjoyable.

Once you've selected an environment to be in, prepare that area.  Have water on standby to stay hydrated and avoid coughing, or keep snacks stocked just in case you get a hardcore episode of the munchies.  Bring a journal to write out your thoughts. (Side note - one our Marketing Director's dad is an avid stoner but specifically uses cannabis to track everything he thinks and feels while under the influence.  We're not saying to take a highly scientific approach to being high, but you can if you want!)  If you're the type to read while high, do it - I promise you, reading high is a completely different experience versus reading sober.  Have a curated Spotify playlist, or if you like entire sets of music that just go on and on, have a Soundcloud set saved - we recommend the SIDEQUEST set.

Whatever you think you'd enjoy the most during the ritual, factor it in.  At the end of the day, having your environment in perfect working order will only encourage you to smash out your intentions, thus leaving you feeling more level-headed, balanced and accomplished.  Keep in mind, however, that each ritual may be different for you, so having ONE set and setting might not do the job.  Consider selecting a handful of locations to choose from based on the intentions you set for that session.

READY TO GET THE BALL ROLLING?

Now that you have all the steps needed to create your own, unique, weed ritual, it's time to get the ball rolling.  Set those intentions, pick out some frosty flower, and set up that cozy environment.  We'll have you enjoying your weed in no time!